10 Best things to do and see in Lucca 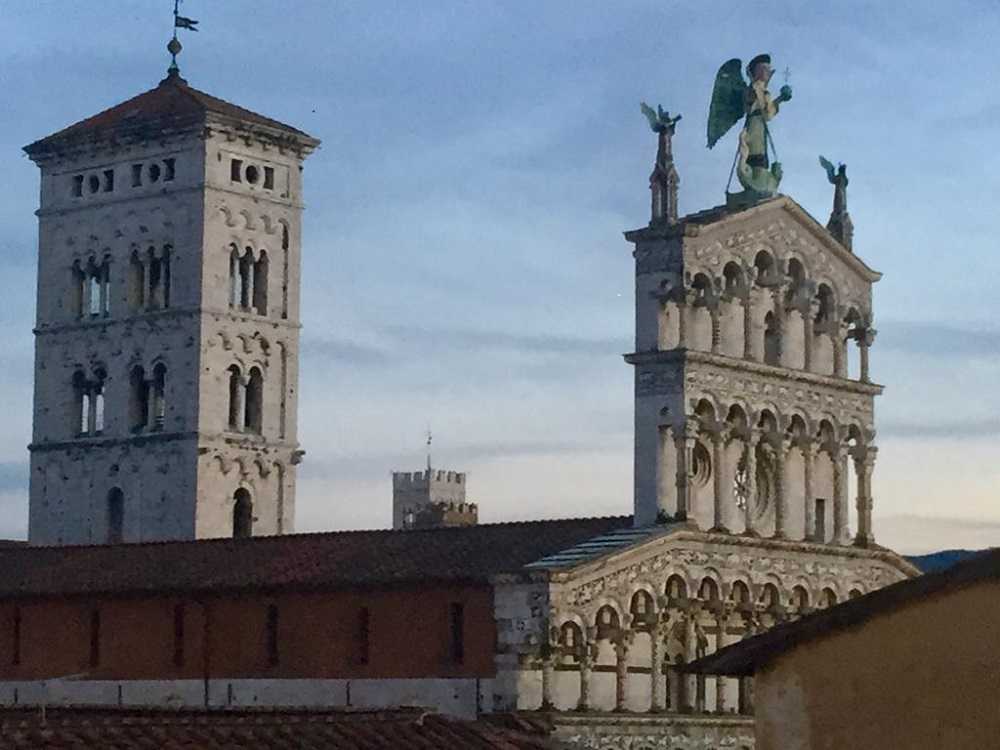 10 Best things to do and see in Lucca

If you decide to spend your holidays in Tuscany, you can’t miss Lucca!

The town is often overshadowed by other Tuscan ladies, but once you get to know it, you will surely fall in love with it. Located a few kilometres from the city of Pisa, Lucca is known worldwide for its sixteenth-century walls still intact and for being the birthplace of the famous composer Giacomo Puccini. It is a hospitable city, easily visited on foot and by bicycle, with excellent gastronomy and surroundings rich in nature and history. But that’s not all, the fortified town offers many jewels to discover.

Here are 10 things not to be missed in Lucca:

1) The already mentioned sixteenth-century walls are the symbol of the city: built starting in 1544 to defend the city from a possible Florentine siege, during the nineteenth century have been transformed into the green lung of the city and a public park, where locals and non-locals like to spend their days walking, playing sports and organizing picnics. They are 4.223 kilometres long and 30 metres wide and have remained intact to this day. You can walk along them in the cool shade of about 35 different species of trees that make them fascinating and pleasant all year round.

2) Tangent to Via Fillungo we come across the Piazza dell’Anfiteatro; the name of the famous square already tells us what was in this space occupied today by one of the most beautiful squares in Italy. Built on the remains of an ancient Roman amphitheatre dating back to the 2nd century BC, the structure we see today is the product of a renovation-recovery project designed by the architect Lorenzo Nottolini and carried out in 1830.  Today, Piazza dell’Anfiteatro has become an elegant venue for cultural and musical events, as well as an excellent place to taste a good glass of wine in one of the many bars overlooking the square. 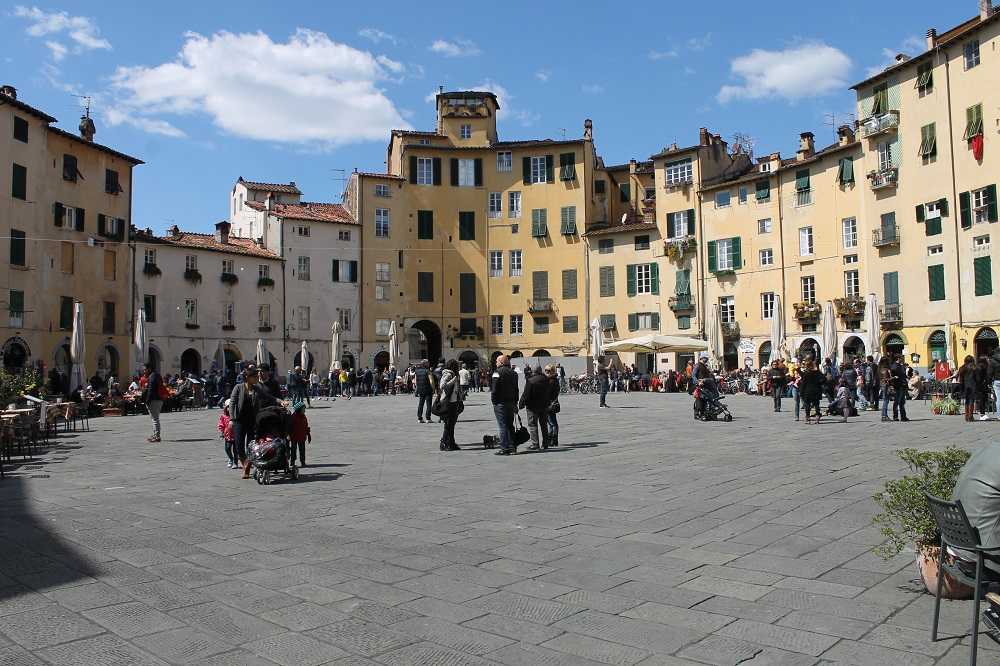 3) If you are looking for the centre of the city, you should certainly head for Piazza San Michele, a forum in Roman times and then a market square until the 19th century. The church of the same name stands out with a strong scenic impact: mentioned since 795 AD, it is a symbol of the Pisan-Lucca Romanesque style.  A few steps away is the house where Giacomo Puccini was born in 1858. 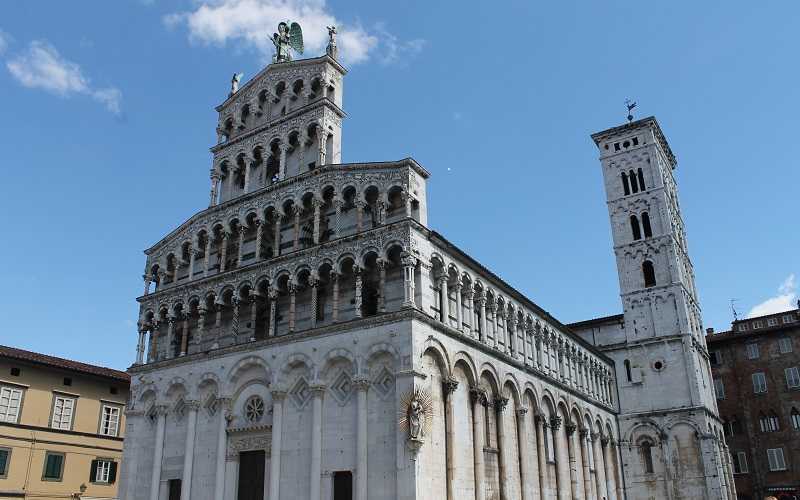 4) You cannot visit Lucca without climbing one of its towers! Today only two of the many medieval towers remain intact: Torre Guinigi and Torre delle Ore. The first, ancient symbol of the Guinigi family, continues to surprise tourists with its garden of 7 holm oaks at the top; the second, with its 50 metres, is the highest tower in the city. Climbing the steps of both towers you can admire a splendid view of the city from above: the austere palaces and narrow streets, the red roofs, the secret gardens, the church towers and in the distance the hills and mountains that frame the city.

5) The Cathedral dedicated to St. Martin is the city’s main religious monument, built in Romanesque style between the 11th-13th centuries, but rebuilt inside in the 14th-15th centuries. The church plays a fundamental role from a religious point of view, as it houses the wooden statue of the Holy Face, now confirmed to be the oldest wooden sculpture in the West. For centuries, the cathedral was a forced stop for pilgrims on the Via Francigena precisely because of the presence of this crucifix, which, according to legend, was sculpted by Nicodemus under the guidance of Divine Grace.

6) A hidden baroque jewel is Palazzo Pfanner and its beautiful garden: owned by the Moriconi family in 1660, it then passed to the Controni family and in 1846 to Felix Pfanner, an Austrian brewer who came to Lucca at the request of the Duke of Bourbon, in search of a “skilled brewer”. Felix thus set up his brewery here, the first in the Duchy of Lucca and one of the first in Italy.

7) Also bordering Via Fillungo, there is Piazza San Frediano, with the church of the same name dedicated to the Irish bishop Frediano, who founded a church in Lucca, near the river Serchio, to guard against floods in the second half of the 6th century. The present church has a beautiful 13th-century mosaic, one of the few in Tuscany. Inside the church are the remains of Santa Zita, venerated and loved by the people of Lucca since after her death (27 April 1272). 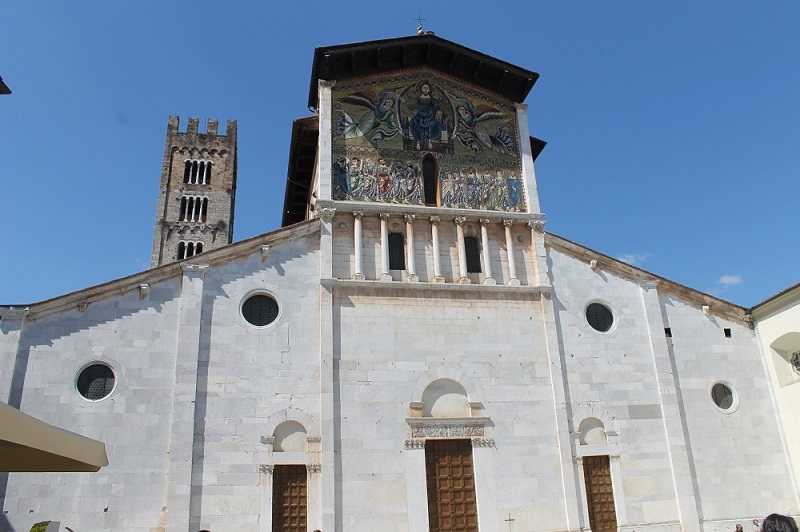 8) The already mentioned Via Fillungo was the ancient cardo of the Roman colony and today is the city’s elegant promenade, a meeting place for both historic shops and large chains. The narrow street still retains its medieval character with its old houses and towers, and the Art Nouveau shop windows and the signs of the old nineteenth-century shops are still intact.

9) Piazza Napoleone is the largest square in the city and hosts the Palazzo Ducale, the palace of political power since ever. The square was built at the behest of Elisa Bonaparte, who, once she had obtained power over Lucca, decided it was necessary to modify various aspects of the town’s appearance in keeping with French standards.  To pay tribute to her brother, Elisa named the square Piazza Napoleone, but for the people of Lucca it is simply and significantly “Piazza Grande”. Today the square continues to be the hub of the town’s social life and special events, such as the  Lucca Summer Festival and Lucca Comics and Games. 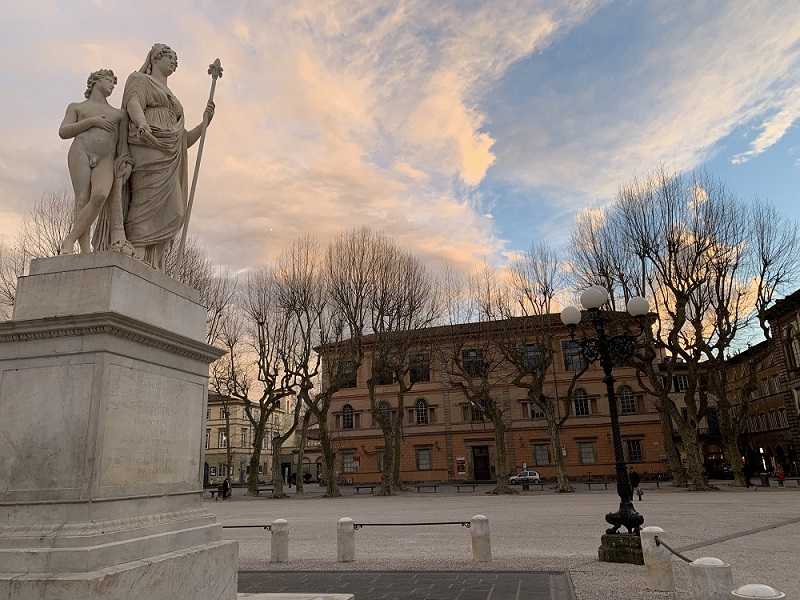 10) Away from the most crowded streets of the city, it is worth taking a walk along Via del Fosso. This is definitely one of the most characteristic streets of Lucca, so called because of the ditch that divides it for its entire length. The ditch was built in 1376 to defend the eastern part of the city and followed the route of the medieval walls. For centuries this street played a primary role in the city’s economy, as the water from the moat was used as motive power for the numerous craft workshops present, including those for silk.

How to reach Lucca city centre:

From Pisa Airport you can reach Pisa Centrale Railway Station in a few minutes by taxi or by the electric People Mover just outside the terminal and then take the regional train to Lucca that is 30 minutes far away. You can also take a taxi or the bus directly from the airport.

From Milan or Rome take the Frecciarossa fast train and change in Florence Santa Maria Novella Railway Station. From Florence take the regional train to Lucca.

From the A11 Autostrada (motorway) take the Exit Lucca Est and follow the direction to Lucca railway Station.  There you can easily park at the public car parking next to Rex Hotel.